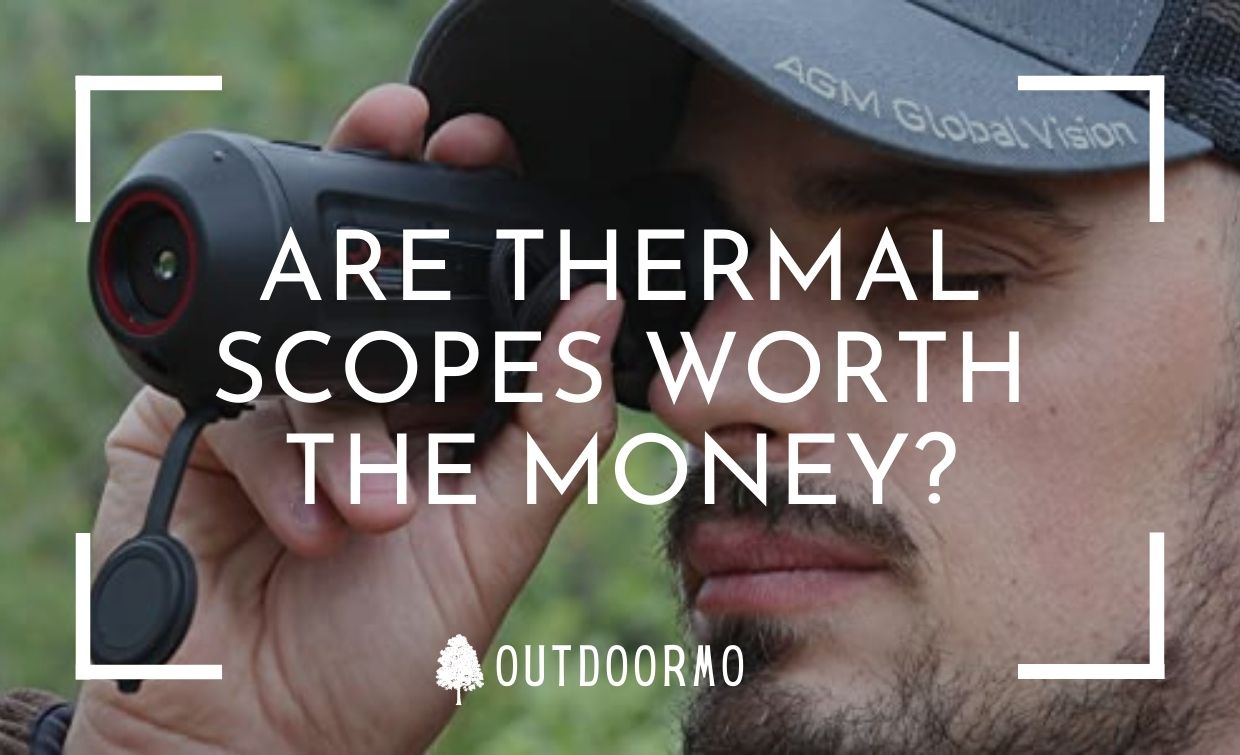 Hunting in the night is not an easy task. After all, humans are designed to rely on light such as the sun to view the surroundings easily. However, modern technology has allowed us to observe things in pitch-black environments. With the help of thermal optics, any hunter can enjoy the thrill of seeking prey in the middle of the night.

In this article, we will talk about thermal technology and their capabilities and cost. By the end, you should be able to determine why thermal scope is expensive and the value that they add to any hunting journey.

Before we dive deep into the pricing of this hunting gear, we should first be aware of the science behind it. Thus, there is a need to discover how thermal imaging works and how it helps in night vision devices.

Thermal imaging refers to technology that captures infrared energy light emitted by objects due to heat. Using data from infrared radiation and infrared emission sensors (IR sensors), computers inside thermal imagers assign color values to the information. This gives a detailed view of the heat map of any subject viewed from the lens cap.

The system is embedded into various reticle options or an aiming scope in thermal scope or monocular. This gives hunters a clear view of fowl or game even in harsh weather conditions such as snow, low visible light environments, and even caverns.

Why are thermal monoculars so expensive?

Here are some reasons why most thermal monoculars cost a lot.

Thermal monoculars or scopes use unique technology compared to regular security cameras, which use photosensors to capture and write data into a picture. In the first place, it does not rely on any light sensor to function. It instead uses the power of heat to map the colors of a given object.

If you think that normal infrared sensors are used in thermal weapon sight, you need to think again. Any component of various reticle options, especially the IR sensors, must not emit heat as it may affect the color mapping of the thermal computer. Thus, a special type of heat-free sensor is employed.

These sensors, also called cryogenic infrared sensors, cost a lot. It reduces the overall background or excess heat emitted from the imaging system. Cryogenic coolers are add-ons that are very beneficial to a thermal optics, but the resources needed to create them are not cheap.

Another component that makes thermal imager scopes a bit more expensive than regular imaging systems are lenses. Compared to regular systems, which use glass as the basic viewing option, thermal scope use germanium-based lenses to compensate for wavelength changes.

Germanium is a rare raw material, and thus, processing it to become usable scopes also takes a lot of toll in terms of finances. It is reported that turning just a kilogram of germanium into a precision lens costs around $40,000 or more.

So are thermal scopes worth the money?

Despite its price and availability in the market, it is safe to say that thermal sight scopes are worth the purchase, especially if you are hog hunting or anytime of hunting at night. For example, other night imaging products greatly rely on a small amount of light to function. However, since thermal scope is not photosensor-dependent, they will still prove to be very efficient even in pitch black regions and places.

Also, thermal scope have added benefits for tackling moving objects. Even machinery and equipment benefit from the mapping system of thermal scope as they perform equally in mobile and stationary subjects. Also, thermal imagers are the go-to tool when dealing with high-heat and high-voltage environments. This lessens hazards in any given scenario that requires the detection of temperatures.

An added benefit of thermal scope is that they have built-in reticles when it comes to your best thermal imaging monocular for hunting. Thus, they do not only help you see the detect targets, but they also help land precise and accurate shot. Some even argue that thermal scopes are much better than night vision goggles and scopes due to their added application in harsh weather conditions.

Cheap vs. expensive – what would the key difference be?

Now that you know about the factors that make thermal scope costly, it is time to scrutinize the difference between expensive and affordable thermal scope. Here are some of them.

Like cameras, high quality thermal scope also have a sufficient resolution. Resolution refers to the overall size that a digital image contains. It is measured as megapixels or the number of recorded pixels per image. Cheaper thermal scope cut down pixels to save up from sensors and digital processors. Thus, it is common to see entry-level thermal scopes at lower resolutions that are not standard even for displays.

Another factor that you should look at is the color range. It is defined as the processor’s ability to map the detected heat of the captured infrared light (IR Light) data. Cheap thermal scope will have fewer colors available for viewing, while professional-grade ones are more than capable of detailed information for the processed heat map.

Durability also comes into play when choosing cheap vs. expensive thermal monoculars. For example, a high budget thermal scope is usually military-grade, meaning that they are somehow resistant to drops, scratches, water, and elements of nature. On the other hand, cheaper scopes are more likely to get damaged easily as time passes by.

Since cheaper scopes are made in mind, it is common for them to use low-grade germanium as reticle and lenses. This deteriorates the potential quality of the product and might result in missed shots during the hunt. No one wants to experience loss of fowl just because of a substandard aiming system that affects your accuracy.

Thermal imaging technology is an excellent scientific tool since it deals extensively with detect heat and radiation. For example, enormous temperatures caused by chemical reactions may be measured without the worry of threats and dangers. Another example is how certain control subjects behave or set temperature when medication is administered. Thermal camera and imaging applications are limitless, including volcano and marine investigations.

Thermal imaging scopes are used in most places that store valuable commodities, such as banks, pawnshops, and army storage, to strengthen security. These systems are extremely difficult to circumvent and evade due to their error-free operation. Some even combine night vision cameras with heat lenses to gain a better perspective.

The imaging process may help detect electrical and electronic wiring problems. Defective circuits, for example, that are not apparent to the human eye will release irradiance and heat and may be handled in a safe and orderly way. Technicians use imagery to pinpoint important places in a wiring installation to always secure.

What are some alternatives to a thermal scope?

It is important to know about night vision scopes because they produce and render better images than thermal scopes. This is because restrictions in sensors and cooling present in thermal systems are not present, thus, giving more room for improved resolution. However, they do not offer the same detection level as thermal scopes, which are not reliant on light.

Numerous are unaware that thermal imagers may be used with monoculars. When these two elements are combined, the result is a device known as Thermal monoculars, and there are some really strong ones on the market. Some modern monoculars can even take images and videos to store important data.

Furthermore, thermal monoculars are made to be lightweight and comfortable. It provides additional advantages for nighttime coyote or hog hunting, searches and rescue, and surveillance missions. These can also be attached to helmets or headwear; they do not offer the same detection level as thermal rifle scopes, which are not reliant on light.

Numerous people ask questions like; does thermal imaging work in dalight? Thermography works properly during the day, but it performs considerably better at night. This is due to the higher temperature difference between living organisms and their environment, making heat map contrasts much more evident.

Additionally, the sun produces some ambient radiation, which contributes to the real temperature of the surface being scanned. As a result, if you want to get the most out of your thermal lenses, using them at night is highly suggested.

What is the life expectancy of a thermal scope?

Aiming any form of the camera at a high-intensity heat source can damage sensors and processors. As a result, it is not advised. On the other hand, some infrared cameras lense provide additional protection against charged materials. When combined with a picture of the sun, it might result in phantom images.

Some quality optics will only detect a section of the atmosphere directly in front of the light. It will not emit an accurate picture of seen objects unless the emissivity constants are known.

What’s a good thermal scope for the money?

Thermal scopes mostly have a warranty of up to 3 years. However, this differs from company to company, and there are even options to extend the total duration of the warranty. It should be noted that thermal image system can be likened to heavy-duty digital cameras. Thus, when circuits fail or electrical issues appear, the whole system will deteriorate.

Why are thermal scopes so expensive?

There are lots of amazing thermal rifle scopes in the market. However, I like the ATN ThOR 4 640 1-10X due to its advanced optical power and great future. The produced resulting image resolution is more than enough for short-mid range hunting, and it makes prey easy to locate thanks to a range finder and an automated projectile calculator. Also, the whole hunting journey can be recorded and streamed.

Should I get thermal or night vision?

Thermal images are the best in detection in any environment. However, night vision technology performs well in producing excellent image quality and resolution. Personally, For your hunting in the day and night time, thermal optic is the obvious choice. However, if your goal is to have better night hunting sessions, a night vision will be more efficient.

An important question is very hunter mind ”are thermal scopes worth it”. It is certain that most thermal scopes and monoculars are expensive, but they take your hunting skills to new heights. These even have added features such as an aim and projectile calculator to give you more gains in the field. I believe that thermal image sensors are great investments. Thus, a hunter should not shy away from purchasing them.

If you can purchase a thermal rifle scope and maintain it properly, then you’ll have a good companion for many years. Good brands should last you long enough to enjoy your hobby to the fullest. Furthermore, these are equipped to have long expectancies to use them optimally. Remember to choose the best thermal scope that suits your hunting style, and enjoy your adventures!