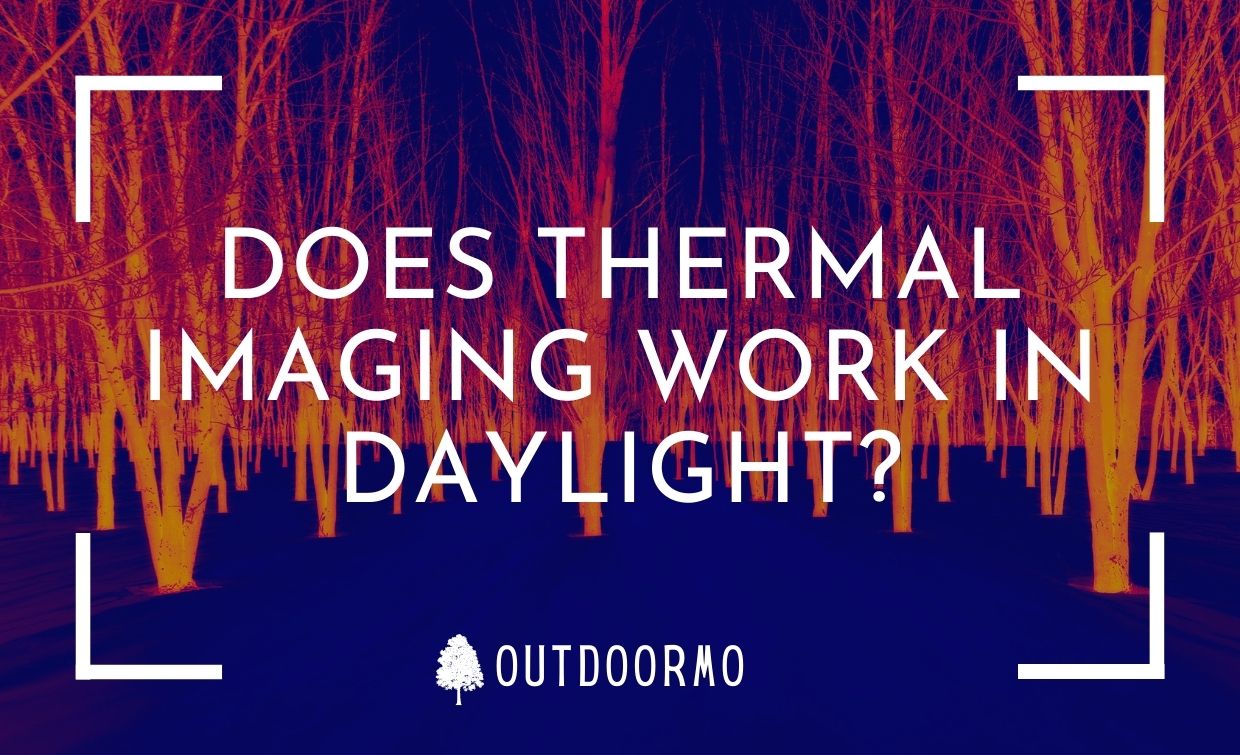 Yes, thermal imaging works perfectly in daylight. It is not concerned with visible light sources and relies on temperature, and it can be utilized during night or day. But, a number of factors can affect the performance.

Thermal imaging is technology beneficial to many fields. For example, it can be used in medicinal applications, security, surveillance, and even industrial optimization. In hunting, it is especially helpful, especially in areas with very low visibility.

This article will teach you the basics of thermal imaging. In the end, you should not only be confident to answer the question: does thermal imaging work in the daylight, also, you will have knowledge on its applications, best conditions, and differences with other imaging equipment.

Coming Up hide
1 How Thermal Imaging Works?
2 Radiation Sources
3 Applied Thermal Imagery
4 Thermal Imaging Cameras and Monoculars
5 Best Conditions for Thermal Images
6 Worst Conditions
6.1 FAQs
6.2 What happens if you point a thermal camera at the sun?
6.3 Can infrared be seen during the day?
6.4 Does thermal imaging work in summer?
6.5 What are other applications of infrared?
7 Conclusion

The formal term of thermal imaging is infrared thermography. Dissecting the words simply means writing infrared data into light in terms of heat. To know the science behind it, there is a need to delve into infrared radiation and its relationship with heat.

Anything with a temperature above -273 Celsius or absolute zero emits infrared radiation. Thus, materials, especially organic ones, will have noticeable infrared signatures. Such occurrence happens even without the presence of light.

Thermal imaging devices detect infrared data and process them. Through the processing stage, color values are assigned for different amounts of infrared data. The warmer the object, the brighter its color will be. On the other hand, cooler ones will show dark blue hues.

This is then outputted into a screen that shows a complete image of the detected object in the thermal lens. The heat map reveals a live feed of the scope or camera and perfectly functions at night. Subsequently, specialized sensors and coolers are needed for it to function.

Thermal imaging works well in many conditions. However, there is one specific phenomenon where it does not work perfectly, and this is the presence of high radiation sources from the electromagnetic spectrum.

One common type is direct solar radiation. When a thermal imaging camera is pointed in the sun, it detects the high radiation coming from it. Thus, the information relayed to the processor deteriorates. It should be noted that such precaution must be observed.

Another radiation source that can hamper the operation of thermal imaging is artificial lamps. These give off slight streams of infrared radiation that will affect the output image. Thus, it is recommended not to include them in the lens as much as possible.

One last source of direct radiation that must be avoided is reflections or shiny objects. Again, the existence of these materials will throw off the readings of the thermal sensor and result in undesirable imagery.

Several industries benefit from power thermal image rendering. Here are some of them:

Animals in the wild are often camera shy. They get startled by light sources, which might cause them to run off. Thus, this makes it hard for cameramen and wildlife experts to get a hold of such elusive creatures. However, the power for thermal imaging holds an advantage in catching animals’ natural habitat.

What makes thermal imaging special is that it does not need any light source to operate. Because of this, it is a more discrete way of observing different beings. Also, thermal imaging does not harm animals, making them a good candidate for documentaries, especially during the night.

Since thermal imaging greatly deals with temperature and radiation, it is a very good tool in science. For example, one can measure great temperatures due to chemical reactions without fear of hazards and dangers. Another instance is observing how a certain control group behaves or regulates temperature when the medicine is applied.

There are endless possibilities for thermal imaging applications, and it even extends to volcanic and oceanic studies.

This can also be considered the most common application of thermal imagery. Hunters in the night employ thermal lenses, scopes, or monoculars to spot prey during the night. Because of this tool, greater enjoyment in the field is possible even with very limited vision.

Electrical and electronic wiring issues can also be observed with thermal imagery. For example, faulty circuits that are not visible to the naked eye will emit radiation and heat and be addressed safely and organized. Engineers use heat maps to locate critical points in a wiring project so that it always remains hazard-free.

Most establishments that keep precious goods such as banks, jewelry stores, and military storage use thermal imaging cameras for improved security. This is because these systems are very hard to bypass and evade due to their fool-proof operations. Some even overlay night vision technology, night vision devices, and visible light camera systems with thermal lenses for greater vantage points.

Many people are not aware of the fact that thermal imaging can be applied on monoculars. When mixed, the product is called thermal monoculars, and there are pretty powerful ones in the market. Some advanced monoculars even have a picture and video capture capacity to store necessary information.

Not only that, but thermal monoculars are designed to be lightweight and ergonomic. It has added benefits for night hunts, searches and rescues, and surveillance duties. Also, these can be mounted to helmets or headgears.

Thermal imaging works perfectly during the day; however, it performs much better at night. This is because temperatures of organic bodies compared to their surroundings have a larger gap, making the heat map contrasts a lot more visible.

Furthermore, the sun emits some ambient radiation, which adds to the actual temperature of the surface you are scanning. Thus, if you want to experience the full performance of thermal lenses, night usage is highly recommended.

Similarly, there are also conditions where the effectivity of thermal imaging and thermal monoculars is reduced. For example, the existence of glass and mirrors in the viewed environment will mess up the data rendering of the processor from the sensor. Yes, there are some types of radiation that pass through the glass, but they are not enough to form recognizable images.

Also, thermal lenses are unable to work underwater. This is due to the blockage of ambient radiation that impedes sensors from determining imagery. Not only that, but large bodies of water have varying temperatures, making it harder to separate the temperatures of objects.

What happens if you point a thermal camera at the sun?

Pointing any camera into an intense energy source can cause deteriorating effects on sensors and processors. Thus, it is not recommended. However, some thermal lenses have extended protection against energized materials. Unfortunately, when panned with the image of a sun, it can cause phantom imagery.

Other lenses will also only measure a portion of the atmosphere in front of the sun. Without knowing the constants of emissivity, it will not emit an accurate depiction of viewed objects.

Can infrared be seen during the day?

Infrared wavelengths are invisible to the naked eye. Therefore, you need a specialized camera or sensors to see them. However, in terms of thermal imaging, then the answer is yes. Infrared radiation can be viewed with the right equipment during the day.

One should take note that thermal imaging performs better at night time due to decreased presence of ambient temperatures. Thus, it is more efficient to use thermal monoculars at night for better accuracy.

Does thermal imaging work in summer?

Yes, thermal imaging works in all types of seasons. It does not matter whether it is winter, spring, summer, or fall. Infrared radiation is always present as long as an object has a known temperature. Even lenses and cameras are designed for extreme weather conditions such as hailstorms and typhoons. Such equipment is best suited for tactical military operations and emergency search and rescue.

Thermal imaging is usable as long as you remember the best conditions. You must check the presence of glass, intensive sources, and shiny objects to utilize it properly.

What are other applications of infrared?

Infrared is present in your everyday life! For example, induction cookers use infrared radiation to operate. Also, remote controls and optic fibers communicate with other electronic systems.

It can also be used for heating materials. For advanced science, infrared technology is used to study the behavior of celestial bodies. Scientists use spatial radiation to know the distance, luminosity, and number of stars.

We started with whether or not thermal imaging can be used in daylight scenarios. We arrive at the answer by presenting the science behind it: yes, thermal imaging works fine during daylight.

However, some conditions make it perform better or worse. For example, ambient temperature, shiny materials, glasses, and water hampers the processing of thermal images. However, night use of lenses and monoculars are ideal for the best picture and information.