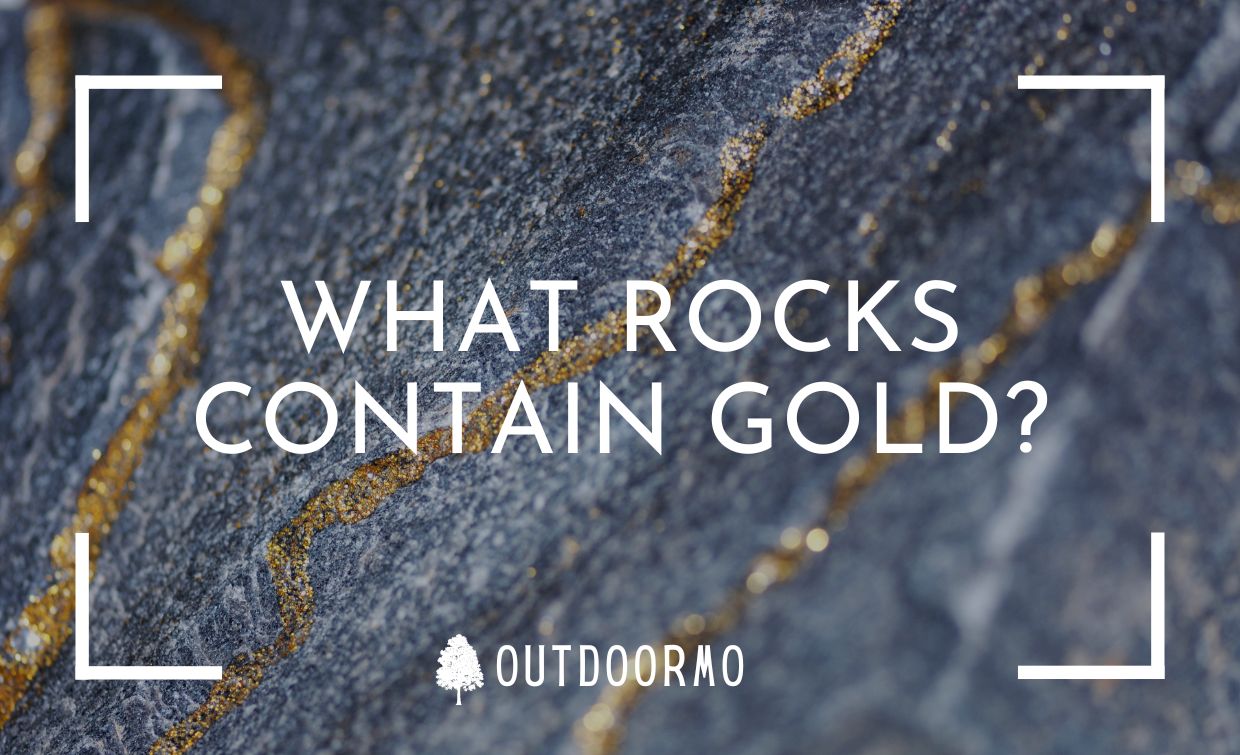 For centuries, people have been fascinated by the idea of finding gold. Today, there are still many people who dream of striking it rich by finding a golden nugget. However, most people don’t realize that you don’t need to go to a gold mine to find gold. In fact, you might be surprised to learn that many rocks contain gold.

Many people may not realize it, but real gold can actually be found within rocks. Yes, you read that right! But now, this might leave you with a question “What Rocks Contain Gold”?

With a little bit of knowledge and the right tools, you can find your own gold-bearing rocks. Here’s what you need to know about prospecting for gold in rocks.

The quick answer is – quartz rocks are the most common rocks that may contain gold. Other than Quartz, gold deposits can also be found in Sedimentary rocks, Granite Rocks, Igneous, and Metamorphic rocks.

Now that you know what rocks to look for, let’s discuss these rocks in detail.

As I mentioned above, Quartz is the most common rock that contains gold.

Quartz veins are formed when hot water and fluids flow through cracks in the Earth’s crust and deposit gold into the rock.

Not all quartz rocks contain gold, but the ones that do can be very rich. Quartz is pretty common, but finding gold veins takes work.

Quartz rock is typically white or clear, but it can also be found in other colors, such as purple, blue, and green. The white color of Quartz helps a lot in spotting when gold occurs since they tend to stand out.

It’s one of the most abundant minerals on Earth and can be found worldwide. This rock is most commonly found in the United States, Brazil, and Japan.

I´ll have more on how to tell if a rock has gold inside coming up, but let´s just take a look at a couple of other rock types where you may find gold.

Another rock to consider looking for gold is sedimentary rock.

On average, sedimentary rocks can contain anywhere between 0.3 to 41 ppb (parts per billion) of gold. That might not sound like a lot, but even a tiny amount of gold can be profitable if you find a large enough deposit.

These rocks are created when smaller rocks and minerals are combined together by pressure and cemented over time.

Sedimentary rocks are found all around the world and makeup around 75% of the Earth’s surface. They are soft rocks easily broken down and often found near rivers, lakes, and oceans.

Some examples of sedimentary rocks include sandstone, shale, and limestone.

Igneous rocks are created when molten rock (magma) cools and solidifies. They are also known to contain gold, anywhere between 0.2 to 73 ppb. In some cases, gold can be clearly seen within the igneous rock.

Igneous rocks are found worldwide, but some of the most common places to find them are Australia, Canada, and South Africa. These rocks make up around 95% of the Earth’s crust. Igneous rocks are very hard and tough to break down.

Examples of igneous rocks include granite, basalt, and obsidian.

Granite is a prevalent type of igneous rock and can be a source of gold deposits, making it a great rock to keep an eye out for when prospecting.

Granite is a tough rock resistant to weathering and erosion. It’s also a very abundant rock, making up around 20-25% of the Earth’s crust.

Granite is found worldwide, but some of the richest deposits are in China, Italy, Germany, and the United States.

Granite is light in color, most commonly occurring in mountainous areas. It consists of Quartz, feldspar, and mica, which make up nearly 80 percent of granite.

When looking for gold in granite, be sure to check any crevices or cracks, as gold can sometimes be found there.

Metamorphic rocks are created when heat and pressure change the structure of pre-existing rocks. These rocks can be a good source of gold, as, on average, they contain gold from a minimum of 0.86 to as high as 22.4 ppb.

These rocks are primarily found in mountain ranges such as the Alps, Himalayas, and other Rocky Mountains.

How To Know If A Rock Contains Gold?

Undoubtedly, gold prospecting is an exciting and potentially lucrative hobby for anyone interested in geology and wanting to get outdoors.

While it’s impossible to guarantee that every rock you find will be loaded with gold, certain types of rocks that I mentioned above are more likely to contain this precious metal. So you can improve your chances.

But how do you know that the rocks you find have gold?

While there is no guarantee with the methods below, there are a few simple ways to test for the presence of gold to improve your chances of striking rich!

The first and foremost method is to take a good look at the rock you think might contain gold.

Although this method could be difficult to spot gold, in some cases, gold can be clearly seen in the rock even with naked eye.

Iron staining is the most common indicator of whether a rock has gold. Iron staining means that the high iron content turns the rocks into a red, purple or yellow color.

When prospecting, keep an eye out for rocks with these colors, as they are more likely to contain gold.

The streak test is a simple way of testing a rock for the presence of gold.

To do this test, simply take the rock you think might contain gold and scrape it along an unglazed ceramic tile.

If the streak left behind is yellow or gold, then it’s a good indicator that you are in business -it means your rock contains gold.

If you do see something in the rock and you suspect it is gold, one of the easiest ways to test whether or not you’ve found gold is to do a magnet test. Iron pyrite, commonly known as “fool’s gold,” is attracted to magnets, while real gold is not. So, if you hold a strong magnet up to your piece of quartz and it sticks, you can be pretty sure you’ve found fool’s gold. However, if it doesn’t stick, there’s a good chance you’ve found the real thing.

Of course, not all magnets are created equal. Your average fridge magnet probably won’t be strong enough to test for gold. For the best results, purchase a stronger magnet, such as an earth magnet, from a home improvement store. With this kind of magnet, you should be able to tell pretty definitively whether or not what you’ve found is the real deal.

How Do You Remove Gold From Rocks?

Extracting gold from rocks might seem simple, but it definitely isn’t easy. The process of gold extraction from rocks has been used since the Bronze Age, and while technology has improved over the years, the basic process remains the same.

The first step when extracting gold from rocks is to crush the rocks into smaller pieces.

You can use a hammer or a pick to break the rock into smaller pieces. You might need a solid container to catch the smaller rocks and pebbles that come apart during the process.

Once the rock has been broken down, you’ll need to use a gold panning technique or sluice box to separate the gold from the rest of the rock.

Keep on crushing it unless we get a powdered form.

The next step is to use Mercury to extract the gold from the rocks. Yes, correct. Mercury.

Don’t worry; it’s not as dangerous as it sounds. Just be sure to take the necessary safety precautions, and you’ll be fine.

Gold can easily dissolve in Mercury and form a mixture called amalgam. It is a mixture of Mercury with another metal like gold.

And you are done!!

Now you have gold in its purest form. You can use it any way you want!

Where can I find rocks that might contain Gold?

A rule of thumb is to look in areas with past Gold mining activity. These are called gold bearing areas. There is a good chance that the surrounding rock could contain gold particles.
There are other places to look for gold deposits, such as near rivers and streams. However, these places won’t guarantee you’ll find Gold, so why not try your luck?

What can be mistaken for Gold?

The most common metal that is often mistaken for Gold is Pyrite. It’s also called “Fool’s Gold” because it looks very similar to Gold but is actually a different mineral. So, be careful when prospecting for Gold!

Does gold stick to a magnet?

No, Gold is not attracted to magnets. This is a common misconception. Gold is non-magnetic, so you can use a magnet to test for Gold. If your rock is attracted to a magnet and looks exactly similar to Gold, then it’s likely that it is pyrite and not Gold.

Finding Gold is not child’s play. It requires much effort, patience and, most importantly, time. Time to go out into the field and look for those rocks that are associated with Gold and then extract it.

Search for the Gold in the rocks I mentioned earlier, and you might just get lucky.

However, if I´m being honest, it is very unlikely you will be able to find anything, but if you’re up for the challenge, and want a fun hobby to get you outdoors, then go for it. You could consider rockhounding too.