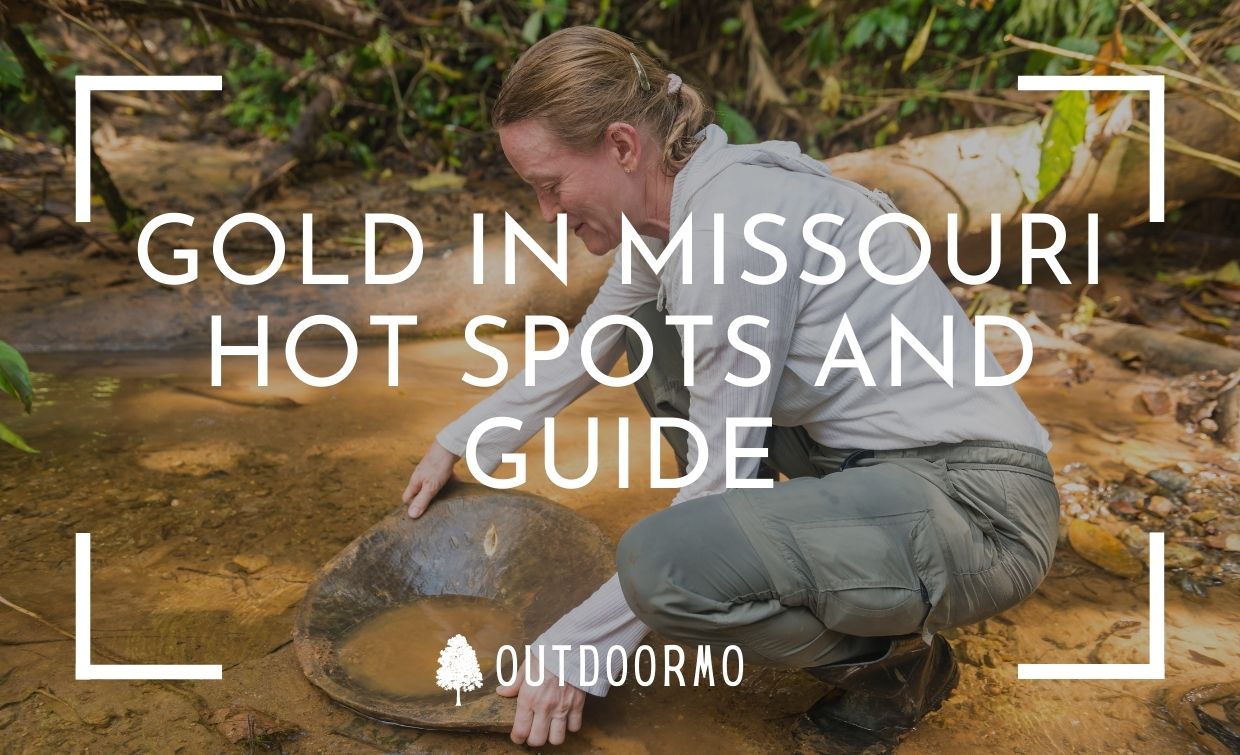 Gold has been at the heart of every civilization for ages, serving as a currency that propels economic growth to this day. It has been shown to be the noblest of the few noble elements in the periodic table.

It has been proven to resist the test of time, despite the fact that it is not the rarest element. Unlike silver and iron, gold does not tarnish or corrode. It barely interacts with anything else, but because of its malleability, it can be employed for a variety of purposes.

Gold in Missouri has been a hot destination for treasure hunters and gold prospectors from all over the world for decades. Gold mining has been a popular pursuit for centuries, and understandably so.

When you find that beautiful nugget of gold, it feels like you have found something valuable and rare. It is also the most malleable metal on earth – it can be made into anything from jewelry to electronics and more.

Maybe you are a local resident or maybe you’re just passing through. Well, either way, we have the information that you need right here!

You may also enjoy

*The product links in this post are affiliate links, which means that if you purchase after following one, I make a small commission from the sale at no additional cost to yourself. Please see our disclosure page for more information.

Is There Gold in Missouri?

While gold can be found in Missouri in Northern Counties, near the Missouri River, in reality, the number of gold occurrences in Missouri is relatively small. Almost all of the gold discovered in the state has been extra-fine-grained flour gold.

There has been no commercial mining activity in the state on a large scale. In some regions, recreational gold panning can yield tiny amounts of placer gold.

The gold discovered in the state is nearly exclusively thought to have come from glacial sources that were transported down during numerous ice ages. This gold was spread across the Midwest of the United States, including sections of Missouri. Almost the majority of it has a delicate texture and a sporadic distribution.

A History of Gold Mining in Missouri

The only places in Missouri where gold may be found are the counties along the Missouri River, where the glaciers transported gold down from Canada. When the last glacier melted some 12,000 years ago, the gold was left behind.

Whatever gold is discovered is incredibly fine flour gold, which can’t support a commercial operation but is nevertheless a lot of fun to find.

This is gold found in terminal moraines, which are distinguished by their hummocky appearance and numerous sand and gravel deposits. They originated when the glacier was continuously melting in one location. Gold deposits are frequently accompanied by diamonds, which are more likely to be found in commercial quantities in locations where glaciers once walked.

Diamonds are another example of the various riches that the glaciers have brought down from Canada.

Along the sand bars that line the Chariton River and its tributaries, gold can be found in pannable deposits. It is also been discovered in sand and gravel deposits in Kirksville, Adair County.

There are two gold-bearing locations in Macon County, one of which is near the town of Elmer and is known as Murray Gulch. Gold has been discovered in glacial sediments near the village of Gifford.

Many geologists advise rockhounds and gold hunters don’t spend too much time seeking gold in Missouri since it will be a waste of time. That isn’t to say that Missouri is devoid of minerals; mineral deposits can be found all around the state. The area near Joplin used to be home to large lead and zinc deposits.

Although the mines are no longer operational, there are plenty of mineral specimens to be found in the region.

In Missouri, panning and collecting precious rocks is allowed in national or state parks as long as it is done using non-mechanical equipment, such as panning.
However, if you wish to use machines or explosives to pan for gold, you must apply for a local Missouri Park Ranger office permit.

So How Do I Find Gold?

You could find gold in any random place you look, but you’ll find that gold is considerably more prevalent in regions where it has already been discovered and where there is historical evidence that it exists.

The greatest technique to locate gold-bearing areas is to conduct research. You’re unlikely to come upon a totally new gold finding, but you might come across a section of an established gold-rich area that still retains some gold.

You’ll have a far better chance of finding success if you look for old gold mines, rivers, and creeks where the early miners were looking. It takes some practice to locate these locations. Some indicators are more noticeable, while others are more subtle.

Beginners frequently go to the nearest river or creek to their home, do some panning, and then conclude that there is no more gold to be found. The truth is that there is still a lot of gold out there for prospectors to uncover, but you have to know where to look.

Want to start gold panning but don’t know where or how? Keep reading as we’ll provide you with some information on ways for your gold prospecting adventure.

Are you looking for a fun way to get the whole family outside? Gold panning is a great hobby for young children, geology buffs, and anybody searching for a relaxing outdoor activity.

Although gold panning is an art with a learning curve, it is a reasonably simple activity to get into. The materials are inexpensive, and getting started does not require many hours of practice.

We should talk about keeping your feet warm and dry before we go to the gold pan, shovel, and snuffer bottle. Gold panning takes place in water, which is typically freezing cold mountain streams. Without a pair of waterproof boots and some warm socks, you’d quickly become irritable.

While some parks provide pans, purchasing your own panning set is the most convenient option. You have two options when it comes to pans: metal or plastic. Steel pans are the way to go if you want to feel like an old-time prospector. Plastic pans, on the other hand, are more popular because they do not rust or corrode. The riffles molded into the sidewalls of most pans act as tiny gold traps, and the colored pans give enough contrast for you to immediately identify the gold at the bottom of your pan.

A shovel or trowel for digging, tweezers for picking up gold flakes, a snuffer bottle, and a glass vial for keeping all of your hard-earned gold are all optional instruments that could come in helpful.

There are numerous magnificent creeks and streams where gold panning can be enjoyed. Gold is a heavy metal. As a result, it will not be found floating on the river’s surface. It’ll most likely settle where the water slows. Gold can also be found under large rocks or within crevasses so remember to delve deep. To protect your own safety, choose a creek or stream with calm, slow water.

Before settling in for the day, make sure you check out a couple of sites along the river. Always follow mining etiquette and plug in any open holes or rocks that have become dislodged throughout the digging process. Experimenting around your local parks to locate the optimum spot is both a learning experience and a lot of fun.

Panning is a separating procedure in which you separate the gold from everything else. Sure, it sounds simple, but looking for those minuscule gold flakes might drive you insane. You’ll build your own technique over time. For the time being, here are the steps:

Where To Find Gold in Missouri

The Chariton River and many of its tributaries have been reported to have placer gold. Many of the waterways in Adair and Schuyler Counties are reported to contain gold. Also, in Murray Gulch, Northeast of Elmer, gold has been discovered in glacial outwash zones.

Another place to look for gold is Sand Creek in South Gifford. Fine placer deposits are most likely to be found in the North Fabius River, which flows southeasterly through Schuyler, Scotland, Knox, Clark, Lewis, and Marion Counties.

The glacial gold deposits found in Missouri can be quite difficult to locate, but this only adds to the satisfaction of recovering those small flecks of gold from the bottom of your pan. It is recommended to reach out to other gold prospectors in your region to see if you can get some local insight into other areas worth researching.

Can You Find Gold in Missouri Creeks?

Gold can be found around the Sand Creek and Mussel Fork Creeks, a tributary of the Chariton River. These creeks were deposited by glaciers thousands of years ago during a different ice age that covered one-third of Missouri’s Northern territory with gold deposits.

Since all waters are almost certainly gold-bearing due to this occurrence, other creeks could have some too.

What state has the most gold in the ground?

Currently, Nevada has the most gold among all the US states. 3 of the top 10 gold mines are located in Nevada. Over 200 million troy of Gold has been extracted from gold mines of Nevada over the time span of two centuries.

Was there a gold rush in Missouri?

No, there was no Gold rush in Missouri during the 19th Century. The reason is there is only a little amount of Gold is present in the state of Missouri. And that too in very fine form.

Finding gold in Missouri can be a time-consuming and expensive process. But it is worth the effort to find that first nugget of gold, as you may never know when your luck will run out. The next time you go out to explore, keep your eyes peeled for any of these tell-tale signs that may point towards gold. You never know what might be just a few feet from where you’re standing.

If there’s one thing we’ve learned about the history of Missouri gold mining, it is that prospecting will tell you that knowledge is power and experience is a great way to learn about your surroundings as well as how best to find gold.