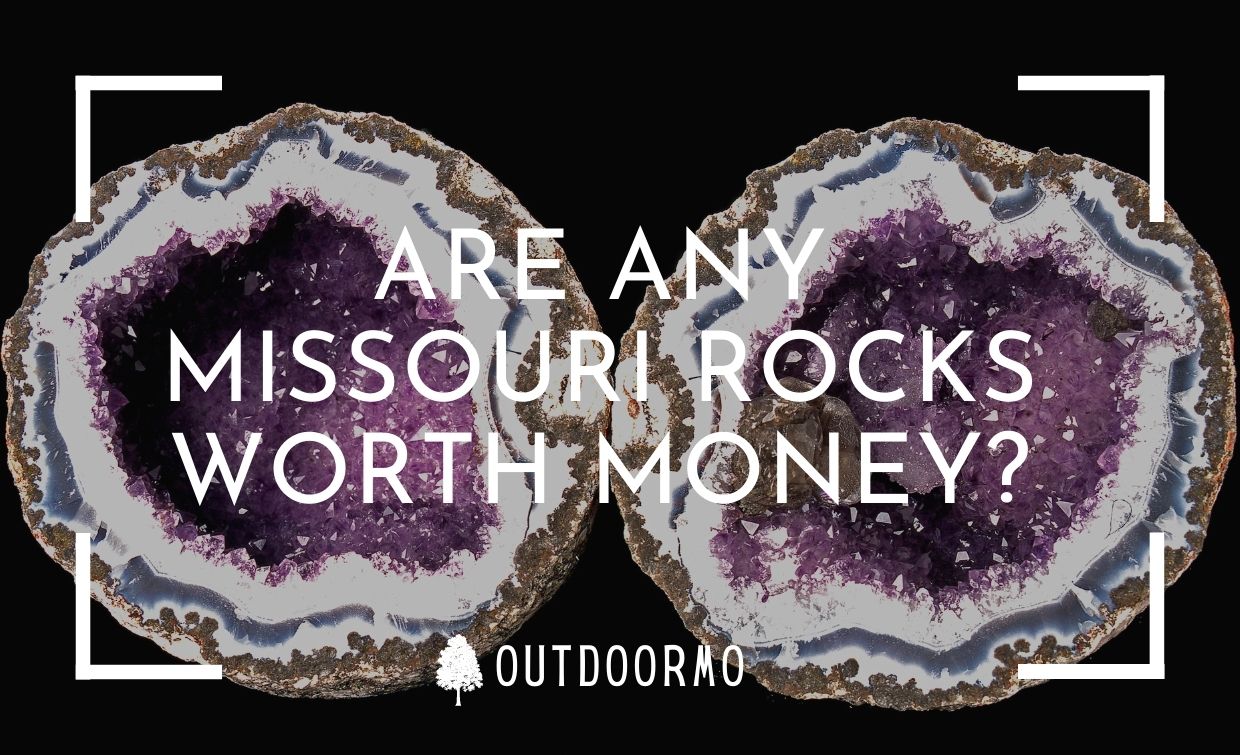 But are any Missouri rocks worth money? It is hard to say. There are many places where you can find Missouri rocks and all of them have their own unique characteristics and quantities. Some people collect them for their beauty, some because they are rare and others just like having something that is from a specific location or event in their collection.

Some people believe the stones they collected were worth a lot more than others because of how rare it is to find certain types in some areas, but there really isn’t any way to know for sure unless you do your research first.

The quality of the specimen, perceived rarity, and sale history are all factors that go into determining the value of rocks and minerals.

There are a variety of criteria that go into determining the value of a rock or mineral specimen. Depending on how the quality, rarity, and sale history of the same item or collection change over time, it may sell for drastically different prices.
There is no universally accepted value for any specimen. In the end, what someone else is willing to pay determines their worth.

But certainly, there are some qualities present in some special type of rocks that makes them valuable like their hardness, crystalline structure, or unique colors.

What Gems can be found in Missouri? | 8 Valuable Rocks and Crystals

These are the 8 most valuables Gems found in Missouri:

Agate is a translucent microcrystalline quartz type. When the quality and color are desirable, it is utilized as a semiprecious stone. Brown, white, red, grey, pink, black, and yellow is some of the colors that it comes in. Impurities cause the colors, which appear as alternating bands within the agate.

It is important to remember that agate prices are subjective, and similar agates might command vastly different prices. Furthermore, landscape agates are also one of the most expensive varieties of agate.

Where to find Agate in Missouri?

Many minerals, including agates, can be found along the Mississippi River and its tributaries.

Barite is a brittle non-metallic mineral with a grey, white, or bluish tint. It can also be colorless, brown, yellow, or red in some areas.

Commercially, it is employed in the medical industry, and because of its substantial weight, it is also extensively used in mud drilling, particularly for high-pressure oil wells. It is also used to make the chemical barium, which is used as ballast in heavy construction equipment tires.

At the mine, drilling mud barite costs around $150 per metric tonne on average. Celestite, ilmenite, iron ore, and synthetic hematite are all barite substitutes in drilling mud. None of these alternatives have been successful in displacing barite in any significant market.

They’re either too pricey or don’t perform well enough to be competitive.

Where to find Barite crystals in Missouri?

In the United States, Missouri is a major producer of barite. Most of the production is mined in Washington County, where barite and lead ore are found together in surficial and near-surface deposits

Because of its flawless cleavage in three directions, calcite is one of the most difficult minerals to cut. The majority of the expense of faceted stone comes from the work involved in cutting it.

Normally, a faceted stone would crack during the cutting process, resulting in a gem that is much smaller than the original size. As a result, cut calcite weighing more than 50 carats is extremely unusual.

Where to find Calcite crystals in Missouri?

Some of the best calcite in existence can be found at lead-zinc mines located in Southern Missouri and Grindstone Creek.

One of Missouri’s most important minerals is dolomite. It is composed primarily of magnesium carbonate and calcium, with tiny amounts of iron and manganese present. It usually comes in a range of colors, including pink, brown, grey, green, black, white, and colorless. White hexagonal crystal dolomite makes up the majority of the dolomite found in the state.

Are the Dolomites valuable?

In addition to being an industrial mineral, dolomite is highly valuable in the museum and in the eyes of collectors when it forms large, clear crystals.

Where to find Dolomite in Missouri?

Dolomite and dolomitic limestone quarries abound in the state’s center and south-central regions. The deposits in the eastern region are ideally placed near the Missouri and Mississippi Rivers’ key transportation lines.

Galena is one of Missouri’s most popular collecting minerals and the state mineral. It is the world’s major lead ore, and it is extracted from a variety of sources across the globe. It can be found in medium- to low-temperature hydrothermal veins in igneous and metamorphic rocks.

Galena is an important mineral since it is used to make the majority of the world’s lead. It is also a notable silver ore. It has few uses outside of being an ore, yet that does not negate its importance.

Where to find Galena in Missouri?

Although galena is mostly found in the Joplin, Flat River, and Fredericktown regions of Missouri. It can also be found throughout the central parts of this state.

Geodes are secondary geological formations found in sedimentary and volcanic rocks. A geode is a hollow rock with a layer of dazzling crystals on the inside. It appears unremarkable from the exterior and is frequently missed. Cracking open a geode, on the other hand, reveals a rainbow of crystals.

Geodes are valuable because they have complex natural formations and contain interesting or rare mineral crystals inside.

Can you find Geodes in Missouri?

You can find Geodes at the crossroads of Highways 61 and 27, 6 miles west of Alexandria or 2 miles south of Wayland, and at the Sheffler Rock Shop and Geode Mine.

Quartz is one of Missouri’s most popular collectible minerals. Clear, brown, pink, and purple are some of the colors available. Amethyst is the most well-known of the purple quartz variants.

It is a mineral that is used to create glass and is also used as a decorative stone. Because it is a common mineral, you can find it in Washington County, particularly in the Old Mines and Potosi areas. Northern Missouri is also a good place to look for them.

Quartz is a common mineral, yet it is also unique and valuable material. Of course, it won’t command prices comparable to diamonds or other popular colored stones, but it will always command a price because it is both beautiful and functional.

Where to find Quartz in Missouri?

You can find them in Washington County, particularly in Old Mines and Potosi. Northern Missouri is also a good place to look for them.

Sphalerite is a valuable collectible mineral that can be found in Missouri. Because these gemstones are brittle, they should not be used in jewelry. It has exquisite cleavage and would not be able to withstand the trauma that a ring stone would face. On the other hand, might be worn as a pendant or brooch for a special occasion.

Many aspects influence the price, but the most important is cut, color and clarity. Sphalerite is typically kept by collectors.

Where to find Sphalerite in Missouri?

It is most common in southwest Missouri, although it is also been documented in northern Missouri, though in much smaller amounts.

Are There Valuable Rocks in Missouri?

Some Missouri rocks might be worth something, but others are just common stones found in the ground. It is not always easy to tell if a rock is worth money. You should do your research before you decide to sell it.

When researching whether or not your stone has any value, look for ones that have been given names like The Ozark Rose and Novelty Stone.

These types of stones are often sought after by collectors because they are rarer than most other types of rock found in Missouri’s soil.

If you think there is some type of monetary value on this specific piece, then we recommend doing more research about what kind of stone it could be before taking further action with selling your find.

If you are an Outdoor Enthusiast and love to go hunting. Then you might like these review guides.

How do I know if my rock is worth money?

If you think the rock you find is valuable, you have to check the history of the material of the rock and you have to do thorough research about that rock on the internet.
If you happen to find some of the gems or stones mentioned in the above list, then they are certainly valuable and you can sell them if you find a suitable buyer.

How do I identify a rock I found?

There are some mobile applications available in the play store like KamenCheck or RockCheck and also there is plenty of information available on the internet about the rocks.

What Is the Most Valuable Mineral in Missouri?

Missouri is the world’s leading producer of fire clay, lead, lime, montmorillonite, and tripoli, as well as crushed stone, cement, and zinc. Common clay, construction and industrial sand and gravel, copper, dimension stone, jewels, and silver are all produced.

Where Can You Dig geodes in Missouri?

Sheffler Rock Shop Located in the Warsaw Formation Area, which is rich in geodes, therefore there’s a good chance you’ll unearth buried wealth. The Sheffler Rock Shop and Geode Mine is 6 miles west of Alexandria or 2 miles south of Wayland, at the intersection of Highways 61 and 27.

Final Thoughts – are any Missouri rocks worth money?

If you’re looking for a new hobby, or if you just want to find some rocks and minerals, it is not too late to get out and enjoy some of Missouri’s natural beauty. The final tip for rockhounding in Missouri is to always be mindful of the laws and regulations. Remember, if you find a lot of valuable rocks that are on private property or protected land, it is best not to take anything without permission from the owner. With the information you’ve learned in this article, hopefully, now you know what to look for when identifying a potential rock hound’s paradise.